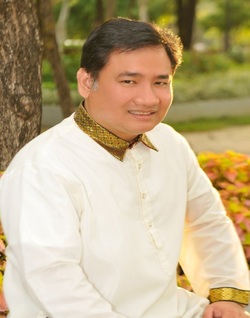 Nicanor C. Infante began his musical training at the age of nine as member of Tiples de Santo Domingo, founded by Dominican friars in 1567, where he was a scholar. He entered the University of Santo Tomas (UST) Conservatory of Music as scholar of UST Conservatory of Music Alumni Association and UST Coro Tomasino, earning a Bachelor of Music Degree Major in Voice under the tutelage of the late Kathy Sternberg and Professor Salvacion Oppus-Yniguez.

Recipient of ANI NG DANGAL AWARDS 2009, National Commission for Culture and the Arts (NCCA) recognizes the achievements of Filipino Artists in the different fields of the arts who have pitted themselves against the world’s finest and emerged the best.

Under his supervision and musical intellect, the Lyceum of the Philippines University Chorale had a victorious start on their first International Choral Competition in the First Asian Choir Games at Jakarta, Indonesia last November 2007, bagging two Gold Medals for Musica Sacra Acapella and Mixed Youth Choir Categories, and Silver Medal for Folkloric Category.

A multifaceted musician, he has performed as, soloist, choral director/conductor, or chorus member in several operas and musicals produced internationally and locally.

Has been invited and sat as juror in various choral and vocal competitions in the country. He is currently the Voice Director of the Quezon City Performing Arts and Development Foundation Inc.

We`re always accepting new patients! We believe in providing the best possible care to all our existing patients and welcome new patients to sample the service we have to offer.

John SmithEnvato CEO
We`re always accepting new patients! We believe in providing the best possible care to all our existing patients and welcome new patients to sample the service we have to offer.